Ain Madhi is a village in the Wilaya of Laghouat. There is a distinction between the new Ain Madhi and the old town where Seyyidina Ahmed Tidjani (may ALLAH sanctify his precious secret) lived and where the Prophet (peace and blessings be upon him) walked.

Among the virtues of this noble town, there are the words of the well-known Sidi Muhammad Ibn Arabi Damrawi (may ALLAH be pleased with him), companion of Seyyidina (may ALLAH sanctify his precious secret), who said to the inhabitants of Ain Madhi: “If I show you all the parts where Seyyidina Ahmed Tidjani (may ALLAH sanctify his precious secret) walked in the company of the Prophet (peace and blessings be upon him) you would have to walk for three days to relieve yourself.” Furthermore, the great companion and pole Sidi Hajj ‘Ali Tamacini (may ALLAH be pleased with him) said : “This town is like a place of spiritual retreat and here your wishes will be fulfilled.”

The old town of Ain Madhi is an oasis, it was founded in the 6th century ad and at present it is almost empty (but recently the Algerian government has initiated renovation with the long term aim of resettling people there). This town was named after Al Madhi ben Yaqoub who founded it after discovering a spring (which is located 3 kilometers from the town) 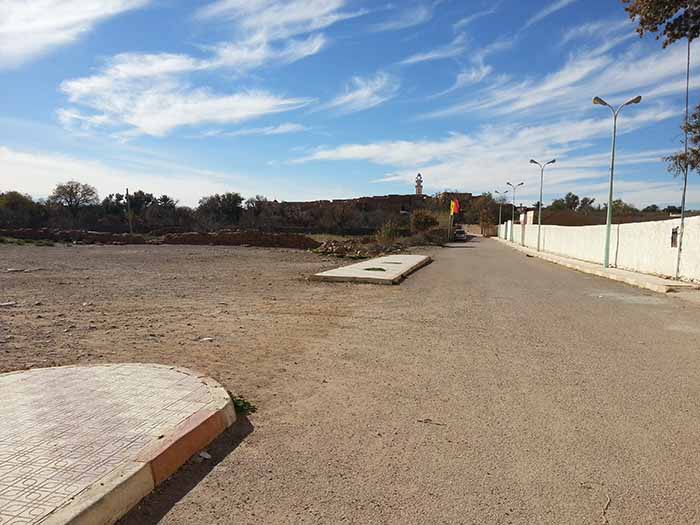 In the distance, the old town of Ain Madhi with the minaret of Masjid Atic (the oldest mosque in the village)

Indeed, it was around 1781-82 ad i.e. in the year 1196 of the hegira, after having left Tlemcen, that he retreated in this blessed place where he had the great spiritual opening (cf The life of Seyyidina Ahmed Tidjani (may ALLAH sanctify his precious secret)). Here, in an awaken state, he saw the Prophet (peace and blessings be upon him) who gave him direct initiation and entrusted him with his spiritual path: The Tariqa Ahmediya Muhammediya Ibrahimiya Hanifiya.

The city of Fes was built around 789 ad by Sidi Mulay Idriss 1st (may ALLAH be pleased with him), saint and descendant of the Prophet (peace and blessings be upon him). Towards 809, the city became the seat of the dynasty through his equally pious Sidi Mulay 2nd (may ALLAH be pleased with him) where his mausoleum is located. In 818, two distinct quarters developed in this noble city due, on the one hand, to the massive arrival of 8 thousand refugee families from Cordoue (Spain) and on the other hand 2000 refugee families from kairouan (modern day Tunisia)

This imperial city will grow and prosper through events over the centuries. In 859, Fes was endowed with one of the principal, spiritual and intellectual center of Islam, the mosque of Qarawiyin. It is thus named because it was founded by virtue of the generosity of a pious lady named Fatima, daughter of the immigrant Muhammad El Fihri the Tunisian, in the Kaouranese quarter. She invested her entire fortune in the construction of this magnificent mosque which has 14 doors and whose prayer hall can host 20000 people. In addition, within its wall is the oldest Islamic university in the world frequented by the greatest minds in all areas of knowledge. In the 14th century, it was frequented by more than 8000 students.

In the course of history and the succession of ruling dynasties, Fes lost its privilege place as capital of the kingdom to Marrackech and then to Meknes, regaining its status during the reign of the Sultan Alaouite Mulay AbdAllah (1729-1759) and until 1912 when the capital was moved to Rabat. It remains nonetheless the spiritual capital of the country.

By continuing to use our site, you accept the use of cookies.